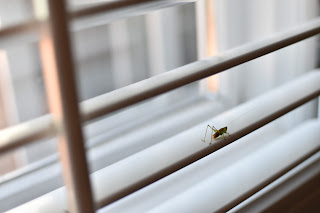 At some point over a week ago, I reached to grab a towel off the counter and this little cricket jumped out of it, which I did not appreciate at the time.  Since then, we have been noticing him in different places around the kitchen and getting a little excited when we see him every day.  Rose decided that Lucas would be a good name for him, and ever since he's had a name, Rose makes sure that he also has some toys to play with as well as plenty to eat. 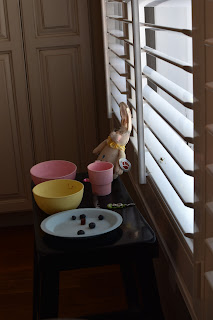 For the last few weeks, my kids and the neighbors have been super into playing "volleyball" in the yard.  They use this sweet setup of two dog leashes suspended between two bikes and a big pink ball. 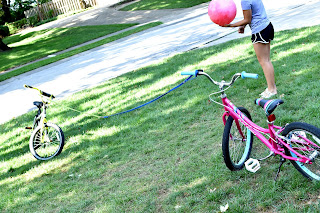 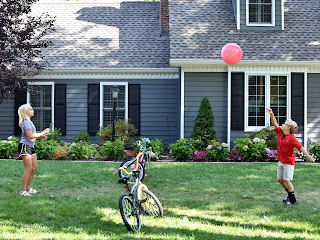 Towards the end of the summer, it was making me a little crazy because there was a LOT of drama about volleyball.  Some days they could play forever and be perfectly happy, but other days there was someone in the house every two minutes, complaining about the unfairness of something or other. 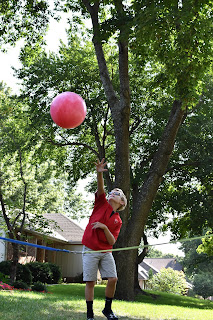 This last weekend, however, Steve told them they all had to stop playing volleyball because they are killing the grass.  There may have been tears from one or two of the children over the termination of their beloved game, but by today they had come up with a new game, and involved new neighbors as well.  Somehow Emma convinced not only her own siblings, but also four little neighbor girls, that it would be a good idea to pretend to be members of a city in which Emma is the mayor.  They played city out on the driveway for about three hours today, and even after they had to go home for dinner, the little girls came back afterwards to be bossed around by Emma some more!
Posted by Sarah at 9:58 PM

It sounds like Emma is taking after her mother!

I hope that cricket is storing up the food Rose gives him to last through the winter.

Oh, Sarah, I love these sweet posts about your family's everyday life! Your pictures are really neat too.

Kids are too funny. Our cat would not have allowed poor Lucas to survive in our house!

Your kids are hilarious! Hopefully Emma won't abuse her power!